The Flight of the Zuckerberg
Dave Pell:

Facebook is constantly urging you to share your immediate thoughts and reactions to every life event. We were a couple days into the company’s biggest challenge before Facebook’s creator shared any of his thoughts on the matter. There’s probably a lesson in that.

This is the best reaction to the CA/Facebook story that I’ve read.

A couple of weeks ago, Max Krieger wrote a really interesting twitter thread about the design of San Francisco’s Metreon building. It got a lot of traffic and was retweeted into my timeline a few times. I always find it interesting when multiple people point to a specific Twitter thread because Twitter’s awful design makes threaded discussions a nightmare to read. Like reading a novel by turning pages with a pliers – sure, you can do it, but it’s an awful experience.

I didn’t think much more of it until a few days later, when John Gruber also linked to the thread and, more importantly, linked to some of Max Krieger’s older twitter threads through threadreaderapp.com.

And, dear readers, this has changed everything for me.

Laid out in this more thoughtful way – flat and with no separations between tweets, with actually readable typography and with no cropping of images forcing you to break flow to see the full context – you can see how the twitter thread is a wonderful art form in itself. When it’s done right, of course (for example, you’ll see Krieger isn’t numbering his tweets).

Unlike blog posts like this one, tweets are conversational by design. You get a much better sense that of the author’s actual voice because they’re speaking to you rather than speaking at you. Combine this with a long-form discussion of a topic that the author is really genuinely passionate about and you’ve got something I could sit and read for days.

I recently read Cory O’Brien’s Zeus Grants Stupid Wishes, which is a jokey, lighthearted summary of the major world myths. But what makes it interesting is the way it’s written. This is not a dry, didactic lecture. The entire book written like an IM conversation with a friend or – to bring this back on-topic – like a well-done Twitter thread. Here’s an example of what it looks like: 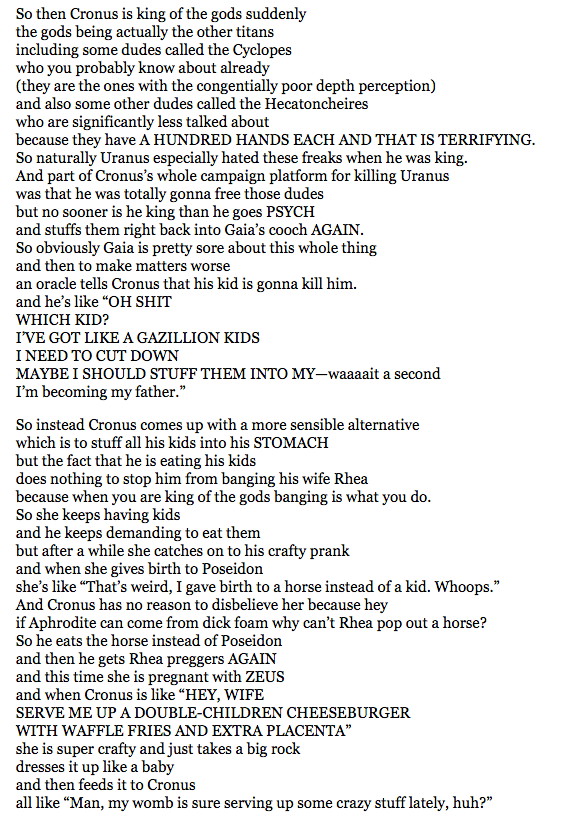 And as I predicted, I devoured this book. Loved it. Not just because it was easy to read (which definitely helps when you’ve got a weeks-old baby), but because it felt like I was casually talking to someone I knew about something they were super knowledgeable and passionate about.

I’m not saying I want all books to be written in this way (but wow, can you imagine how great it would be if, say, Ulysses was written like this?), but instead I’d like for anyone thinking of starting a Twitter thread to keep these things in mind: keep your voice and remember that Twitter dot com is not designed for long-form threaded monologues, so imagine your words being presented with a designer’s eye.

How I Wrote Arrival
Eric Heisserer describes how he adapted Ted Chiang’s Story of Your Life for the screen. What I love about this is that his method for deconstructing the story actually became part of the screenplay.